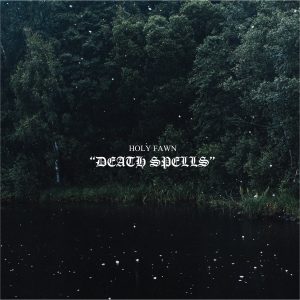 This is a special record. In fact, ‘Death Spells’ isn’t just another record, this is a real work of art. And this is one of those works capable of moving you, transporting you, maybe even changing you. This isn’t just another record, it’s a long hard stare out into the dawn or the dusk or some other time of low light and high atmosphere, it’s static electricity crackling in a storm cloud, it’s getting lost in the woods.

No prizes for guessing that ‘Death Spells’ is heavy with poetry and emotion then but this isn’t an aloof or difficult album. It might demand multiple listens but it doesn’t require them. So, sure, there are found-sounds, ambience and experimentation, but never for their own sake. Yes, the average track time is over six minutes, but it’s never a slog, there’s not a second wasted. Holy Fawn are on a journey here and while that might sound dangerously pretentious, they don’t want to travel alone, they absolutely want to pull you along for the ride. And within 30 seconds of opening track, ‘Dark Stone’, you get a clear sense of where the Arizona outfit want to go.

It begins with oscillating radiant synths, organic-sounding, not digital, like a rising fog, before a range-filling blast of noise rips through the calm, a mighty oak falling in the forest. It’s a moment that demands you stop whatever you’re doing and listen. The noise stops as quickly as it started and the synths return and the quiet and the loud continue to trade places until they merge, forming a dense, propulsive piece of post-everything excellence. It contains everything you need to know about Holy Fawn’s knack for both brooding atmospherics and crackling fire and fury, all excellently mixed and produced, and it’s one of the best songs of the year.

‘Drag Me into the Woods’ takes four minutes to get to its big riff centrepiece but induces goosebumps the whole way, ‘Yawning’ is a surprisingly bouncy and upbeat standout, and if Deftones had written the final crushing minute of ‘Arrows’ people would be calling it a decisive return to form. Elsewhere, vocals rise and fall through the music- ghostly hums and high notes reminiscent of The Antlers or even Sigur Ros, and full-throated feral roars, perfectly weighted to accentuate the heavier moments, almost used as another instrument. One of the most impressive things, audible on every track here, is that while using many of the same building blocks as other bands of their ilk, Holy Fawn routinely make something compelling, something new. The leap this band have taken from their first record to get here is gargantuan.

Never mind the woods then, you could get lost in the weeds trying to pin down what genre this might be. It’s post-rock until its decidedly not and there are elements of shoegaze, metal, classic emo, and dark ambient too. I think iTunes classifies them as indie and that doesn’t work at all. Via their bandcamp the group themselves go with ‘loud heavy pretty noises’ and that’s much closer to the truth but in the end there’s only one genre that really sticks- special.