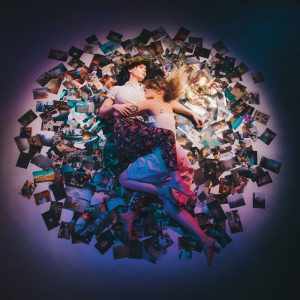 There was little clue in Tengil’s first album, the admittedly epic ‘Six’, that the Swedish quartet were capable of anything like this. They proved that they could play, sure, mixing dark hardcore and post-rock with aplomb, but from long, sinister stanzas and eerie spoken word passages to cover art of a grey face crying black blood, they seemed like a band living in the shadows. With ‘shouldhavebeens’ however, Tengil step into the light.

Opener ‘I Dreamt I Was Old’ starts with a brisk, whipping beat and cold, twinkling synth sounds. It’s a little like a helicopter lifting off, and that might just be on purpose. From the first moment here, there’s no escaping the sense that Tengil are punching through a gloom, ascending to something else, something bigger, something better. Their aesthetics are now pink and purple hues. Instead of any black blood, the band have glitter face paint and there are floral print shirts in their wardrobe. Instead of dark guitars and croaky poetry there are hopeful whispers and massive, and I mean absolutely huge, waves of twinkling, glittering sound.

That first track surges on. The shimmer increases and the beat intensifies and a choir of high, strong voices begins to soar before it all suddenly fades away, leaving only a whisper. Other bands might have left it there, around the four-and-a-half minute mark, one song in the bank, but Tengil, it turns out, aren’t just another band and they crash the silence, vaporise it, with the first of many huge crescendos. It sounds like five post-rock bands playing at once, it’s almost like white noise, but it’s wonderful. And, catch your breath, nearly every track here is like this.

‘And the Best Was Yet to Come’ flips the script and starts with a wall of noise- sense-blasting synths, rapid-fire drums, Sakarias Westman’s impassioned clean vocals, and, don’t let the and flowery shirts fool you, some guitars being shredded to death too. And if ‘With a Song for Dead Darlings’ is abstract noise, made to make your headphones smile, ‘In Murmur’ is like 30 Seconds to Mars but y’know, not terrible.

‘shouldhavebeens’ is an incredibly dense record then, with something new to hear on every listen. I feel like I could spend years with it and not catch everything that went into its construction. And that doesn’t mean it’s a flabby or indulgent piece of work. Instead, there isn’t an inch of fat here, not a second (well, maybe nine) wasted. But the strangest, perhaps entirely personal thing, is the emotions that Tengil stir. They obviously aim for epic but they don’t just nail that, they inspire vulnerability, passion, peace and nostalgia too. In the least tacky and ridiculous way I can write this- this is music made for taking in some grand vista, walking alone in the snow, or considering your meaningless status in the infinite universe. That there are just four people, unavoidably young people too, behind it makes it all the more profound. This is massive, majestic, emotional, and plenty good enough to earn any other superlatives you have ready. Album of the year?