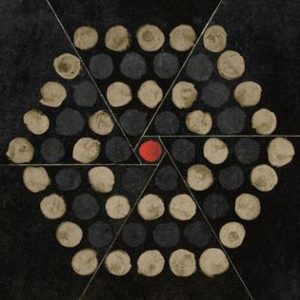 It’s a genuine surprise to hear ‘Only Us’, the first track on Thrice’s tenth album, begin with a bubbling, ominous synth line. It’s a mile away from the powerful roar of the California quartet’s past– no one should expect that anymore- but it is striking, interesting and new. Unfortunately, few moments following it truly demand your attention.

Over the last decade, Thrice have, for lack of a less anaemic word, matured. It was so great to see them grow out of a scene that they never really fit in with anyways, indulge their love of high concepts and innovative instruments, and incorporate more ideas in four EPs than some of their former peers had ever conceived. They never got the credit they deserved of course but went on hiatus with a high. But then, when they returned a couple of year ago they sounded even less like a poetic post-hardcore powerhouse and more like four blokes in plaid shirts playing burly rock and earnest, occasionally epic ballads. And that’s where ‘Palms’ still finds them.

Lead single ‘The Grey’ starts lively enough but, the last 40 seconds aside, isn’t a million miles away from the kind of radio rock trundle you expect from the Foo Fighters these days, all the way down to Dustin Kensrue sounding the spit of Dave Grohl in the chorus. ‘Everything Belongs’ is too repetitive to hit the heights it’s reaching for, the questioning ‘My Soul’ doesn’t feel like Thrice at all, and if Kensrue’s lyrics were a little on the nose last time out, ‘Just Breathe’ and its whole bunch of “something somewhere” might be as vague as he’s ever sounded.

Now, Thrice playing at mid-tempo is still Thrice and there is quality to be found here. After that synthy intro, ‘Only Us’ is slowly fleshed out with 80s-soundtrack drums, full, fuzzy bass, and memorable melodies, ably keeping up the band’s fine tradition of killer opening cuts, ‘The Dark’ is one of the best choruses the band have ever written (at least until you notice just how much cymbal it’s got going on, sorry), and ‘Beyond the Pines’ is a truly arresting moment, a lush and heartfelt and perfectly-measured ballad. But there are also wobbly missteps you absolutely wouldn’t expect them to make at this point.

The drums are flat and distant throughout, sacrilege when dealing with a player of Riley Breckenridge’s quality, so many potentially wonderful backing vocals are lost in the mix too, and there are flourishes in weird places- odd echo effects on Kensrue’s vocals and the jarring orchestral interlude in ‘Blood on Blood’ the worst offenders.

It might be that Thrice are the victims of their own success. Such is the strength of their back catalogue that ‘Palms’ struggles to compete. There a ton of interesting ideas here. Shifting riffs, key changes, and songs built on codes linked to the cover art and concepts of a united humanity. But a lot of it is so subtle that it can’t bloom, can’t truly be. As a result, ‘Palms’ might, just, be a better album than comeback effort ‘To Be Everywhere Is to Be Nowhere’ but perhaps only due to its dogged consistency. There are less troughs, sure, but certainly less peaks.