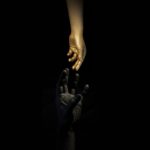 Will Haven have been as low as they can go. Since the late 90s the Sacramento outfit have mined a seam of thick, dark, downtuned metal that, despite the changing scenes around them, has remained untainted by outside influence and uniquely, instantly recognisably, their own. They peaked (or descended if you like) with 2001’s ‘Carpe Diem’, a titanic slab of a record that should only have been written about using the richter scale. In fact, it was arguably so low and so large and so powerful that it didn’t give the band many places to go next. So they split, or went on hiatus, or whatever the right term is for when a band carve out a career-defining record and then have nothing left to give.

They eventually returned of course, and, in between long waits, there has been new music. But while each successive release has been satisfying, sure, it’s also been a little safe. ‘Muerte’ though, is different. Oh, it doesn’t recapture the same molten metal magic as ‘Carpe Diem’ but it isn’t trying to. Here there are synthesisers, space-rock vibes, and rays of light creeping in around the doom and gloom. This feels like a new phase for Will Haven.

Don’t panic, there is no grand departure. Urgent opener ‘Hewed with the Brand’, first single ‘El Sol’, and the ram-raiding ‘43’ are all massive, murky examples of what the band do best and Jeff Irwin still sounds like he’s trying to drill a hole in the earth rather than play guitar. But while ‘Winds of Change’ starts with a wicked riff and barked vocals, the intensity drops to make way for swirling keyboards and what sounds like warped choral voices before the whole song soars skywards. Will Haven have been using ambient introductions and interludes for decades but they’ve never incorporated them so thoroughly, so neatly.

The best reference point is a familiar one. Deftones have often been mentioned in the same breath as Will Haven. It makes sense- they emerged from the same place around the same time and had nothing but good things to say about each other. Previously though, any sonic comparisons were fleeting. Here, now, it makes perfect sense. ‘Kinney’ is heavy, real heavy, but lithe instead of low, Mike Scheidt of YOB adds masses of grizzled melody to the bouncy ‘No Escape’, and Stephen Carpenter even adds his trademark tone to ‘El Sol’. It’s not just mellowing with age- halfway through ‘Bootstraps’ frontman Grady Avenell sounds as ferocious as ever- it’s a subtle, suitable evolution that pays real dividends. That they can do all this and still sound just like Will Haven is fantastic.

Despite its title then, ‘Muerte’ defiantly breathes new life into Will Haven.

tagged with Minus Head, Muerte, Will Haven