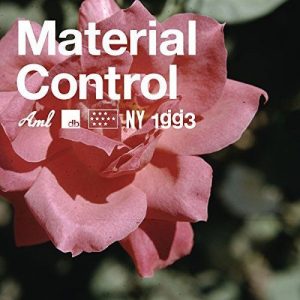 I get it. At one point, in the unsettled territory between the twin peaks of nu-metal and metalcore, Glassjaw meant everything. In a flurry of activity they released two scene-defining records, even though it wasn’t clear what scene they were in, and no one else looked or sounded or performed quite like them. And then they disappeared, leaving only myth and legend and cancelled tour dates behind. Now though, not quite out of nowhere, they have returned. ‘Material Control’ is their first “proper” album in 15 years. And yes, it makes sense that it has been heralded as the return of the kings, I get it. The truth though, is not quite as blockbuster.

Because Glassjaw never really went away did they. Over the years the New Yorkers continually made slight returns- an EP or two here, a surprise festival appearance there- and each time the spiky, frantic hardcore pop of their past had… evolved. Devolved? Whatever. They had twisted it, turned it, experimented. And they haven’t stopped here. Sure, opener ‘New White Extremity’ starts with a bang- plenty loud and ugly enough to make it seem like the band are finally delivering on a decade-old promise- but it soon becomes clear that Frontman Daryl Palumbo and guitarist Justin Beck (for they are Glassjaw) have little interest in fan service or your expectations.

‘Material Control’ is an incredibly busy record but a whole lot of the energy goes wasted. There are riffs everywhere but Beck’s approach is scattergun not laser-targeted, and the bass tones throughout are filthy, nasty, ill, but just too damn loud, drowning everything else out. In fact, on first listen the 12 tracks here blur into one wailing, feral roar. Grime and groove and maximum volume now rule.

‘Citizen’ is one of the darkest dirges the band have ever written, ‘Strange Hours’ pays plenty of dues to try and build an atmosphere but there is no pay off, and somewhere inside ‘Golgotha’ is the song of the year but just as it seems like it might shoot skyward, a chugging, jarring verse throws an anchor out the window. Repeated listens allow serpentine melodies to bloom but it’s all such hard work. ‘Shira’, the closest to a classic Glassjaw cut, definitely has a space where a chorus should be, and Palumbo’s vocal line might creep its way into your head, but really the bass barrels along without once checking if any other instruments are keeping pace. Then right at the end it sounds like an uncanny impression of Glassjaw. And maybe that’s the issue.

For all the band’s quotes of starting fresh with new fire, the past isn’t totally behind them.  ‘Citizen’ is actually an old song with a new title and one of the instrumentals here shares sonic connective tissue with a track from one of those stopgap EPs. Palumbo’s voice is as strong and unique as ever but perhaps at pains to avoid his lyrics falling under the microscope once more, there are songs here that appear to be about, well… nothing. Mid-way through ‘Pompeii’ that’s exactly what he yells, over and over again. And it’s fair to question the singer’s dedication, right? If Head Automatica had panned out or the recent, dreadful Colour Film record had blown up, would this album have ever been recorded?

It is unfair of course to expect any band to recapture their youth or to recapture yours even but there’s nothing here worth such a long wait. ‘Material Control’ doesn’t exist because it was finally time or anything like that, this isn’t Glassjaw completing any kind of trilogy, it’s just the boys in the band doing what they damn well please, just like always. I get it.