The fact that ArcTanGent Festival has changed so little since its inception is a testament not only to the outstanding team of men and women who curate and create it every year but the people that attend it too. The festival has grown at a pretty steady rate over the last five years but one of its unique features remains a consistently friendly crowd, a welcoming atmosphere, and a near complete lack of bullshit. It feels like faint praise perhaps, but pretty much everything about ArcTanGent is… nice. 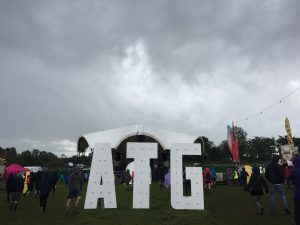 That doesn’t mean meek and mild of course. While Sheffield four-piece Gilmore Trail start quietly, their instrumental rock is made of strong stuff- think the insistent beat of latter-day Mogwai- and they know their way around a speaker-rattling crescendo. A cover of the Twin Peaks theme is neat but the huge smiles on their faces as they are cheered away is even better.

And that’s another consistent thing about this weekend. It’s not just the people in front of the four stages of the festival site that look excited to be here, it’s often the people stood up on them too. This is a very first UK show for Hikes and for every single note of their upbeat, lush rock they look thrilled that anyone at all has tuned up to see them, let alone the sizeable crowd that gathers as they play. Frontman Nathan Wilkins possesses a high, soulful voice and real star quality.

Britney (no, not that one, this one) could care less about star quality, serious business, verses or choruses. Their loop-laden set trips over whatever the line is between brain-bursting buzz and anyone-could-do-that noise, but they certainly have fun doing it.

The many members of Itoldyouiwouldeatyou might be struggling to fit on the same stage (seriously, there’s loads of them and they never stop moving) but their layered emo is neatly done and draws a large crowd. Later, as Hemelbestormer sound check though, a crowd is one of the things missing. The other is an atmosphere to suit their titanic doom metal. Luckily, another ArcTanGent constant is rain and as the Belgian quartet kick off, an almighty storm drives people under cover and plunges the tent into darkness. The band don’t pass up the opportunity and, more biting and powerful live than on record, win over new fans riff after roaring riff. It’s one of the best moments of the day.

Stearica work in any weather. The Italian outfit combine insistent, chunky rhythms with feedback and invention and sound like Radiohead if Thom Yorke was brought up on pizza and wine and confidence. Ohmms do a mean line in Black Sabbathesque bludgeon but the subtler touches of their excellent album from last year are lost in the haze. And Listener are fantastic. As they made a transition from one-man band to full force trio in the last few years their live performances were sometimes a little awkward, like they were still figuring out what worked best, but today they are fully in sync. Set bookends of ‘Good News First’ and ‘Falling in Love with Glaciers’ stand out, Dan Smith’s delivery losing none of its intensity despite this being maybe the millionth time he’s sung these songs, but every track is terrific. They debut three new songs from a forthcoming album apparently about history’s greatest inventors and it’s safe to say the comfort they’ve found with each other while playing live has extended to their studio time.

Hark’s big riffs and bruising delivery are a welcome counterpoint to some of the more considered acts on show today but for true ferocity, Frontierer excel. Tipped by many as a band to watch this weekend, the Scottish group don’t disappoint. From clobbering electronic samples to meaty, mathy riffing and unique squealing guitars, they laser target their set into ArcTanGent’s assembled ears. From way outside the tent the volume might seem like an impenetrable firestorm but risk getting close and there really is so much going on (side note that whoever does the sound for this festival deserves a hefty raise).

Bossk always seem to look different. Talismanic bassist Tom Begley is missing in action today and at one point in their set it’s not clear if one guitarist is obscured by smoke or has left the stage altogether. But, no matter who is behind their beautiful noise, they always sound brilliant. Going through a hefty chunk of last year’s outstanding ‘Audio Noir’, they seem to play more for themselves than anyone in front of them but still leave Bristol as one of the best bands of the weekend. 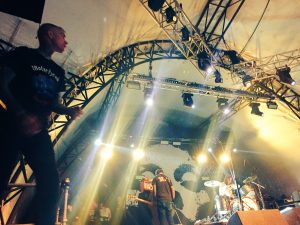 God Is An Astronaut come close to taking the number one spot- their crystalline cosmic rock unique among the more scuffed up rumbles on show elsewhere- but Converge claim their crown with ease.  The Massachusetts maulers look a little out of their comfort zone as they take the stage, more used to being eye-view with their fans and four walls than a tall stage above an open field, but they don’t know how to do a bad show at this point and steamroll any doubts about their dominance inside the first song.

The feral intensity and punk rock speed of ‘Dark Horse’ whips the crowd- not actually the biggest of the weekend but certainly the most zealous- into a fury, ‘Eagles Become Vultures’ is so ferocious you feel it could devolve into pure static if not for Ben Koller’s dynamic drumming, and ‘Trespasses’ is everything good about this band delivered in three killer minutes. That all this can be done by four guys, and four guys who dress like your dad, is jaw dropping.

They finish with a powerful rendition of ‘Jane Doe’ and disappear so fast that when some people leave the mosh pit asking “did that just really happen”, they might not be completely joking. Nice!