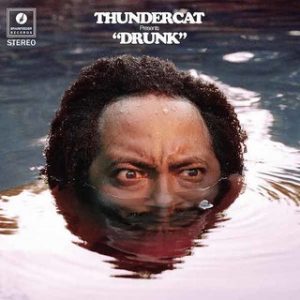 Stephen Bruner is just like you and me. He gets too drunk at times, too stoned, watches too much TV, and he talks to his cat. Except, unlike you and me, he is a bass guitar phenomenon, multi-genre musical marvel, and one hell of an overachiever.

As Thundercat he has worked with some of the biggest and most interesting names in hip-hop, funk, and punk, won a Grammy, and released two albums and an EP of increasingly agile, innovative and exciting music. Where Bruner has previously dealt with grand themes of life and death (and dancing) though, album number three zooms in.

There are still big themes here but Thundercat in close-up brings tales of booty calls, Twitter updates, and losing a wallet while, yes, drinking. He mentions insomnia, anime, and Mortal Kombat, and rather than a weird checklist it’s somehow the most human he’s ever sounded. It’s a fantastic idea, allowing Bruner’s music to do the heavy lifting while his mind and lyric sheet wander more freely than ever.

That music is lush- covering odd pop, electric soul and fast-fingered fretwork fury in just the first five minutes, and then frequently bubbling over into something new. ‘Walk on By’ is a dusty, sombre song featuring Kendrick Lamar (who handpicked Bruner to help expand the sonic palette of his ‘To Pimp a Butterfly’ epic), the rubbery ‘Them Changes’ is just as essential as it was on ‘The Beyond…’ EP, and ‘Show You the Way’ is a sun-baked jam with verses reserved for freakin’ Michael McDonald and Kenny Loggins man.

‘Drunk’ zooms further still. I’m pretty sure this isn’t just a day in the life but a trip inside the idling mind of Thundercat. It’s up and down and big and small and, much like anyone’s mind, it can be messy. ‘Jameel’s Space Ride’, a brief but wickedly catchy track, starts like Erasure and ends as a desperate plea to Bruner’s local police department to just leave him alone, ‘Friend Zone’ is a shot of synths and melody, while ‘Where I’m Going’ uses muted bass and skittering drums to let some darkness in.

So yes, it pinballs around at times, and at 23 tracks, most around the two-minute mark or less, this might look like Bruner’s version of a hip-hop mixtape but nothing (or hell, maybe everything) is a skit. He’s funny but these aren’t interludes played for laughs, this is a stuttering jukebox or a scrapbook or maybe even a rambling checklist confessional. The 90-second ‘Jethro’ is a spongy side note somewhere between lounge jazz and space rock, and ‘Day & Night’ is a thin slice of fried disco gold that deserves to go on much longer. Bruner’s biggest triumph might be that this record hangs together at all, let alone as brilliantly as it does.

There’s a chance this is all candyfloss. As honest and endearing and damn catchy as ‘Drunk’ can be, it might not linger come next week or next month or 2017’s album of the year lists. There’s no denying the impressive construction here or the instant sugary hit of tracks like ‘Tokyo’ or ‘Friend Zone’ but whether their impact fizzles away or sticks around is probably more of a lottery than Bruner would like. Right here and right now though, it’s so easy to sing along.