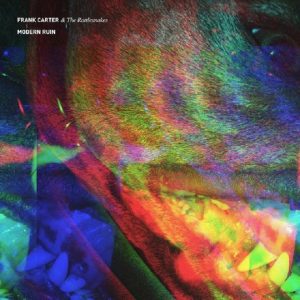 Frank Carter’s first foray into Rattlesnake country produced some captivating fury. Despite its name, ‘Blossom’ was a bloodthirsty rager, a signal flare, an uncompromising sign that Carter might just have rediscovered the passion for punk rock that his rollercoaster experience with Gallows apparently drained away. It was bloody good to hear him roar once more. ‘Modern Ruin’ is not the same.

Instead this is a faint, flat-footed, often misfiring effort. The change is obvious early too- slowly-strummed opener ‘Bluebelle’ is heartfelt enough but leads to nothing, and as much as ‘Lullaby’ barrels around after it, trying to up the ante, the band gain no momentum as they go. It’s like they were aiming for the sleazy danger of early Queens of the Stone Age but sadly come closer to the forgettable trudge of more recent Arctic Monkeys.

‘Snake Eyes’ has swagger but no urgency, ‘Wild Flowers’ might have stood out for embracing pop sensibilities but does little with its “woahs” and “ohs”, and ‘Acid Veins’ is a staid, grungy number. After such a razor-sharp debut, from a man who is goddamn electric when he performs, everything is so oddly anaemic- where there was once raw lyrics, searing riffs and fire, there is now huffing and puffing and filler and fog.

A certain hiss and fizz is sadly missed here then but it’s not just the lack of quote-unquote punk rock riffs or even Carter’s most feral tones that’s the problem (some of the most effective parts of ‘Blossom’ were slow but seething, downbeat and bitter) it’s that next to nothing is compelling. ‘Jackals’ tries to pump the blood but is so short it feels throwaway, ‘Thunder’ does no such thing, and, as the album ploughs on, pulling nothing out of the bag, perhaps even a little too cool to break a sweat, the whiff of another underwhelming record lingers large…

The problem with Carter’s abandoned Pure Love project wasn’t that people couldn’t handle the abrupt gear change from hardcore to soft rock, it’s not that folks didn’t get it, in the end it was down to the distinct lack of hits, hooks or any reason, beside a well of goodwill for the boys in the band, to keep listening. While ‘Modern Ruin’ is not a trojan horse- only the most cynical would suggest Carter might be using the success of ‘Blossom’ to bounce back to the sound he is most passionate about- it does suffer from a lot of the same problems.

Ok, so it is possible to imagine the Rattlesnakes turning some of these songs into real rippers live, but perhaps the only truly notable thing about ‘Modern Ruin’ is just how surprisingly, painfully… ordinary it sounds.