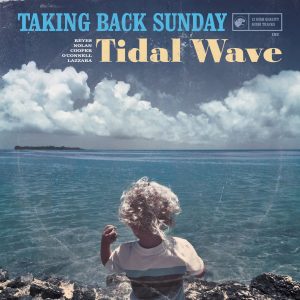 Taking Back Sunday have grown up. Oh sure, the actual dudes in the actual band grew up a while ago. Eye bags, marriages and kids are testament to that. But even throughout early success, internal strife, emo feuds, a break-up and a reunion, it feels like the New York outfit have always sung their songs with a wink and a nod, a terribly witty line here, a throwaway chorus there. Sure, 2011’s self-titled album was an attempt at a mature comeback but it was wracked with reconciliation pains and, well, a bunch of boring songs. ‘Tidal Wave’ might be the first time this band have sounded truly great while also sounding like they truly mean it, no messing around.

Opener ‘Death Wolf’ says it better than I ever could. An energetic but earnest, honest number, it bristles with energy but there are no spikes, no sarcasm, it wants to draw you in, not push you away. It is about as raucous as Taking Back Sunday get these days but talk of post-hardcore feels off base to me, instead it tips its hat to grunge and indie rock, never emo, without once sounding like a copycat thing. It’s a natural evolution from previous album ‘Happiness Is…’ and a fresh start.

Debut single ‘You Can’t Look Back’ clicks brilliantly, even better here than out on its own, but ‘Fences’ is the first 10/10 track, so sweet, unique of this band, and completely confident. The fact that the band have found a new kind of confidence on their seventh album is astounding but no less outstanding. You can sing along to ‘All Excess’ after just one listen, ‘Call Come Running’ is an arms aloft rock that would curdle in lesser hands, and ‘In the Middle of It All’ even features autotune vocals and the band so clearly, so fantastically, couldn’t give a crap what anyone thinks about that. Taking Back Sunday aren’t being bratty or brash, nothing like they used to be, they’re right in the groove here.

Side note: Despite the band’s composure and creativity here there’s a weird game you can play throughout ‘Tidal Wave’. A whole bunch of these songs sound like songs you already know. The title track makes like The Clash’s ‘I Fought the Law’, the internet has already spotted that ‘You Can’t Look Back’ has a little ‘Boys of Summer’ about it, and elsewhere there are echoes of existing hits by Tom Petty, the Ramones and, whisper it, Brand New. Nobody is going to get sued but it’s definitely there.

Consistency does become an issue. The warm, summery haze over ‘Tidal Wave’ gets a little thicker by the second side of the record and the songs don’t punch through it with frequency of the first. And the idea that this is an album lost in time looms reasonably large also. I mean, it will sound pretty great coming out of your car stereo tomorrow, but would almost certainly sound perfect doing the same thing on a Californian summers day in, say, 1989. I’m not saying it’s old-fashioned, I’m saying play it to your dad and see what happens.

Despite a few flaws, this record will stick with you. No brief pop high, it’s wide and deep and deserving of further attention, calling out to be replayed the moment it stops spinning. ‘Tidal Wave’ is the best that an older, wiser Taking Back Sunday have sounded in a decade.

tagged with Boys of Summer, I Fought the Law, Taking Back Sunday, Tidal Wave