Endless Nameless #1- BROTHERHOOD OF THE LAKE

Brotherhood of the Lake hated you. They hated you and they hated me and they hated everybody else, but most of all, I’m pretty sure, they hated themselves. From 2005 to 2013 the Devon quintet played a hard, fast and uniquely angry brand of heavy metal, “a soundtrack to the social decline that surrounds us”. Their early work had all the finesse of a runaway steamroller but with their final albums, two black-hearted volumes of ‘Desperation Is the English Way’, they perfected their art. What should have followed was at least the opportunity to prove the fury was no fluke, at most a hallowed spot in British metal history. Instead, less than a year after releasing their statement records, they split.

In the first of a new series of post mortems for brilliant bands that sadly aren’t with us anymore, Moderate Rock caught up with Brotherhood of the Lake guitarist Rusty to talk about his best and worst memories, the state of modern metal and maybe, just maybe, bringing his band back from the dead.

WHAT ARE YOUR LASTING MEMORIES OF BEING IN BROTHERHOOD OF THE LAKE?
I think the last time we played Hevy was a highlight for all of us. The show felt really locked in and natural and somehow there was a full tent of people who were really into it. Coming from a band who played to an average of 30 or 40 people a night that just felt so great. Seeing friends that you don’t get to spend quality time with throughout the year (was also a highlight). We’d stay with good friends at the same houses pretty much every tour.

The worst memory was while we were on tour with The Devil Wears Prada and Last Witness. The bands were great but we had the worst luck on that tour, we had a window smashed and a SatNav nicked from the hire van and a million other things that cost us money, and it was snowing and we constantly had numb, wet feet.

WHAT WAS THE BEST PART OF BEING IN THE BAND?
For me, it was writing and recording. The best part of being in any band is when you play a new song in a rehearsal room and it sounds the way it’s supposed to for the first time and the band are grinning at each other.

AND THE WORST PART?
The worst part of being in a band is always the financial thing. Playing this kind of music is never going to make you a living and that’s all musicians really want . To use what talent they have and not have to worry about food or rent. We’d go on tour and get to the bottom of our overdrafts then go home and work shitty temp office/warehouse jobs to get out of the overdrafts then we’d be off again. It’s like a cycle of being skint.

DID YOU ENJOY BEING ON TOUR TOGETHER?
Although I like touring I don’t love it. A couple of the other guys are really into it but I think because I was a little older I’d kind of gotten over it real quick. But I know most of Brotherhood of the Lake loved it.

WAS PLAYING LIVE CATHARTIC FOR YOU?
Yeah. It turned from being something where we couldn’t wait to play our music to people, to something that ironed out the kinks in things that we were pissed off about.

AS YOU WERE WRITING AND RECORDING ‘DESPERATION IS THE ENGLISH WAY (VOL. 1)’, COULD YOU FEEL THE PROGRESS YOU’D MADE SINCE YOUR LAST RECORD? WHERE DID THE LEAP FORWARD COME FROM?
I think subconsciously we got tied up with the trends on our first couple of releases and then snapped ourselves out of it for the last two. The ‘Desperation…’ records are more about metal and particularly more underground metal.  The riffs are influenced by bands that I listened to when I was an early teen like Slayer, Carcass, Obituary, Seputura and some early black metal but Rob’s vocal kinda gave it a hardcore edge I guess. 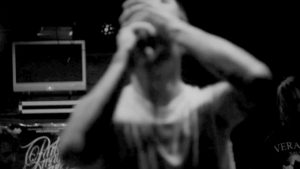 THE BAND’S GUITAR TONES WERE JUST ONE OF THINGS TO IMPROVE. CAN YOU TALK ABOUT THEIR EVOLUTION? DID YOU HAVE THE SOUNDS IN YOUR HEADS AND HAVE TO SEARCH TO CREATE THEM, OR DID THEY COME NATURALLY?
We were so bored of those same tones from every band. Friends used to tell me “Dude, you should get this head and these pick ups” and I’d always think “What, and sound like everyone else?” It got to the point where everybody was making the same album. There was also the whole valve vs solid state argument which is as boring as the PC vs Mac debate so I won’t go into it. For me personally I love valves for clean quiet music but solid state for heavy stuff because it’s more cutting. When I hear a great riff I want it slit my throat rather than repeatedly hit me in the face with a pillow so I used a high gain solid state head and a telecaster with stock pickups and a tuner (sometimes, hehe).

CAN YOU TALK ABOUT ROB’S VOCALS? DID HE HAVE TO GO TO DARK PLACES TO SING?
Rob has an undeniably great voice for hardcore, I genuinely think it’s because he’s so loud! He pushes everything he has out of him so I guess if you want to get a sound that intense then that’s what you have to do. I think it helps that we all have a pretty dark sense of humour; I think you have to have that to be in a metal band, what’s not funny about heavy metal you know! So it’s good fun to get to those dark places to get creative.

HOW GOOD DID IT FEEL TO NAIL THAT “FUCK!” IN ‘THE DESPERATION’?
Hahahaha. It was a great moment in the rehearsal room when that first happened so it had to stay! It should probably go down in history as the shortest sing along at shows ever.

THE CLEAN VOCALS ON SONGS LIKE ‘BLACK KNIVES’ AND ‘TOO BLEAK’ WORK REALLY WELL. WHERE DID THEY COME FROM? WHY DO YOU THINK THEY WORK SO WELL?
I think we had ideas for clean vocal parts but didn’t want to go down that screams route so it was a matter of finding something different. (BOTL guitarist) Grant just tried some stuff with his natural tone and it just clicked. Grant and I are big Soundgarden, Alice in Chains and Jeff Buckley fans so maybe a little bit of that came out.

WAS IT FRUSTRATING THAT THE CRITICAL ACCLAIM FOR BOTH ‘DESPERATION…’ RECORDS DIDN’T TURN INTO A LITTLE MORE COMMERCIAL SUCCESS?
It was a little at the time but I think it was best for it to just be what it was. I hate to think that we would have travelled down a road into a more commercial sound. The ‘Desperation…’ records aren’t really for a mass audience. Unfortunately, maintaining the sound you love and achieving commercial success is a place only few very lucky people get to.

SHOULD YOUNG BRITISH METAL BANDS FORMING TODAY FORGET ABOUT ANY IDEAS OF COMMERICAL SUCCESS?
Well it really does depend on what kind of metal you are playing. You could have a super infectious sound like AC/DC and blow up!  But I think if you are talking about shouting and blast beats then I’d say get a day job and do this as a fun thing you do with good friends and enjoy it .

IF YOU HAD UNLIMITED FINANCE FOR A BROTHERHOOD OF THE LAKE RECORD, WHAT WOULD IT SOUND LIKE?
Mastodon’s ‘Blood Mountain’ with 75% less talent, haha!

WHAT DO YOU COUNT AS THE BAND’S BIGGEST ACHIEVEMENT?
Sticking to our guns on everything! 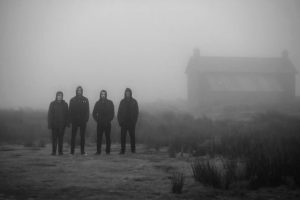 DID YOU EVER FEEL PART OF ‘A SCENE’? DO YOU THINK IT HELPS OR HINDERS TO BE INCLUDED IN SOMETHING LIKE THAT?
We weren’t cool enough for hardcore or nerdy enough for metal so we really didn’t fit in to any scene. We toured with certain bands regularly who were great friends but I don’t think what we were part of had a name.

WAS STOPPING THE BAND DOWN TO A SINGLE EVENT OR A DECISION MADE OVER AN EXTENDED PERIOD OF TIME?
I quit the band for personal reasons and also the financial strain was getting far too much for too long a time. Then the remainder of the guys tried it keep it going but I think it’s hard when you live out on a limb like we do down here.

HOW DO THINGS CHANGE WHEN BANDS BREAK UP? DO YOU TALK THE SAME AMOUNT? MORE? LESS? DO YOU TALK ABOUT THE BAND?
Well I play in Death Parish with two of the guys so we are in contact a lot and everything is cool with everyone else, we are all good mates. I don’t think any of us miss it, but maybe that’s because we could go back to it tomorrow so it’s not like it’s going anywhere.

DO YOU WISH YOU’D DONE ANYTHING DIFFERENTLY? IF YOU COULD GO BACK IN TIME AND GIVE YOURSELF ONE BIT OF ADVICE WHAT WOULD IT BE?
I don’t really have any regrets, we did all we could with the music we made and it was never going to be a big seller in a commercial respect so I think we did pretty well considering. I’d rather repeat exactly what we did than change the way we sound to appeal to more people.

CAN YOU TALK MORE ABOUT THE TIME SINCE THE BAND ENDED? ARE THERE ANY OTHER BANDS OR CREATIVE PROJECTS YOU GOT INVOLVED IN?
Rob is in Agelast, Grant and James play in Death Parish with me and i’m also in Helpless on Holy Roar

IS DESPERATION STILL THE ENGLISH WAY?
Probably more so.

AND FINALLY, IS THERE ANY FUTURE FOR BROTHERHOOD OF THE LAKE?
Ooh, now that would be tellin’.

tagged with Brotherhood of the Lake, Endless Nameless, In Memoriam