And just like that the best weekend of the year is back. Yeah yeah, argue all you like but there is no other festival with this many great bands in such a great space watched by such a great crowd. For three years now the folk behind ArcTanGent have successfully increased the size, scope and ticket sales of their festival without sacrificing its unique experience. Except, what’s this… change is afoot.

Unlike previous years there are two stages running on the opening Thursday and while scheduling bands to start one right after the other might have sounded good on paper, the strategy has teething problems. Sound checks, warms ups and even whole sets start to clash. Even if you’re front row at one stage there’s no avoiding the bass drum check from the other. It’s frustrating at times, some of the severe clashes seem a walkie talkie call away from avoidable, a plain mess at others.

It’s not helped by the BOSS Truck, a monstrous monolith parked inexplicably close to both stages that blares out endless, nameless guitar solos played by people who apparently believe they are headlining the festival all weekend. None of this is enough to change just how special this event is but it’s far from welcome stuff. 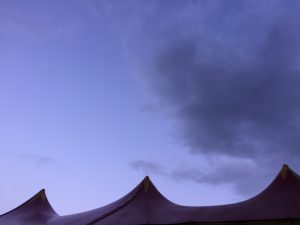 Samoans start a little unsynchronised and never quite click. It might just be that the sound engineers here are still working out kinks but everything the band do is so damn loud that any finesse is blown away. God I’m old.

Talons are (again) incredible. Despite, or perhaps because of, competing with the squealing end of the Samoans set they burst into life and play like this is their last show ever. Running from eerie quiet through powerful post-rock shimmer to bone-shaking louds with relentless energy but impressive composure, the Hereford outfit are brilliant on record but even better live. Give this band your time and money.

Alarmist’s tranquil math rock into Rolo Tomassi’s feral noise is the most peculiar and brilliant transition of the day but neither can beat Quadrupède for pure musical thrills. The Le Mans two-piece perform without flair, letting their music do the talking, but that makes perfect sense when their robot rock is so damn colourful and creative and bold and a million other brilliant things

It’s a backhanded compliment perhaps but TTNG are a reliable little outfit. They never seem to trip the excitement levels all the way into the red but today, as always, they’re fun and funny, fantastically tight (the false start for ‘Cat Fantastic’ a rare TTNG collector’s item), and a phenomenally easy listen.

It might be because Three Trapped Tigers are the first band with excellent sound but they sound excellent. The jagged, jarring way they used to attack their live shows has been replaced with a more considered cut and thrust. Songs are allowed to breathe and build and swell and the space perfectly suits the London trio’s new material, the best they’ve ever written. None of this means you can’t feel the insistent electronics of ‘Kraken’ in the back of your brain or the deep bass of ‘6’ in the middle of your chest but for an hour at least the Yokhai stage becomes a dance club for people who hate dance clubs.

After that the careful pace of Mono initially feels sluggish. It’s always impressive to see the Japanese outfit locked into a glacial groove that apparently only they can hear but it doesn’t scream festival headline set. The wait is worth it when ‘Recoil, Ignite’ finally revs into a juggernaut and ‘Ashes in the Snow’ blooms into a cinematic masterpiece, the four people on stage somehow making the noise of more than 50.

Friday reveals another unwelcome change, the main stage has shrunk. Well, not exactly. The Arc, as it’s known, is exactly the same as it’s always been, but the space around it has been limited, fenced off. The whole area seems cramped and ugly compared to previous years, not terrible just not great, and done with no obvious logic. But there’s not enough time to dwell on that before Viva Belgrado play a blinder. The Spanish quartet present their post-hardcore with boundless passion and while there are genre touchstones much of the bristling noise is excitingly original. It’s a hell of a wakeup call for the campers still emerging from their tents.

The rain arrives at the same time as Vasudeva but the New Jersey trio display their sunny dispositions (they are very happy to be here) and slick rock with style. MNHM are marvellous, embellishing their angular bass-heavy art rock with a saxophone that makes noises like keys, strings and, well, a sax. And Fall of Messiah are a force of nature. If their triple guitar setup and moustachioed drummer wailing at the heavens doesn’t set them apart then the fact that their gritty post-hardcore sounds unlike anything else at the festival sure does.

Canadian quartet Gulfer are great, nodding to Bear vs Shark and Rival Schools and a bunch of other big-sounding little bands that they probably aren’t actually nodding to- its just that my references are way out of date. The raucous vibes of ‘Getting Hit By Parked Cars’ stick with me for the rest of the fest.

Agent Fresco are raring to go. The Icelanders have a strong and unashamed grasp of pop melodies but after performing a “recomposed” stripped-down acoustic set on the main stage earlier in the day they seem to have some pent-up energy to let loose. They turn even their prettiest numbers into electric, eclectic bruisers, peppered with the strangest piercing roars and sharp metallic riffs. It’s an eyebrow-raising extraordinary feat and a festival highlight. Such kudos too for Vignir Rafn Hilmarsson’s frankly indecent dance moves.

Animals As Leaders are well received but don’t nail their set. Maybe it’s a little early in the day for them but where Tosin Abasi usually leads his virtuoso band through their ridiculously complex songs with frankly unfair poise and skill; ‘Tempting Time’ misses its mark and ‘Physical Education’ feels a little ragged. Of course other bands would kill to be this good but the show sags where it should soar. Watching people utterly fail to air guitar along to the technicality in front of them is worth the price of this weekend’s ticket alone though.

If Animals As Leaders miss their mark then Toe hit a bullseye. They start sat down and on acoustic instruments, playing so softly that you have to lean in to hear them, creating a real front-room feeling. As the sun sets they build new loops and layers into their set until they have one of the biggest crowds of the weekend hanging on every brilliant beat and jazzy melody. Superb.

Nature bends to Godspeed You! Black Emperor. As the time for Canadian outfit’s arrival draws near Toe’s summery vibes disappear, the wind picks up and the moon turns a sickly yellow. Opening with ‘Hope Drone’ the enigmatic artists stamp their authority on proceedings, sounding like only themselves, no one else. There are shifting movements and enveloping sounds, noises from instruments you can see and noises from instruments you’d swear must there but aren’t. ‘Moya’ is hypnotic and ‘Mladic’ a magnum opus but it’s a little disappointing that given a two-hour set to really show off what they can do, the band leave early to no fanfare and never return.

The heavens open on Saturday. Alpha Male Tea Party’s crunchy funk and Let’s Talk Daggers’ sharp-dressed punk do just enough to help forget about the mud forming underfoot until Raketkanon take the prize for the most dangerous band of the weekend. If Pieter-Paul Devos isn’t trying to strangle himself with his mic cord then Pieter de Wilde is leaving his drums behind to dive into the crowd. And although I’m going to guess the people under him aren’t big fans of physical contact, the band’s experimental doomy oddness goes down great.

Errors pulling out at the last minute puts perhaps more of a dampener on proceedings than the fine but constant rain and although Owen (Featuring oddly mean-spirited heckling) and MeWithoutYou (featuring a fantastic tie dye shirt) perform smartly enough they do little to brighten things up. Luckily Mutoid Man are a rolling ball of metal riffs, banging heads and terrible jokes. From a huge cover of ‘Purple Rain’ past the coiled rage of ‘Dead Dreams‘ to three balls-out new songs, the all-star trio unleash hell. 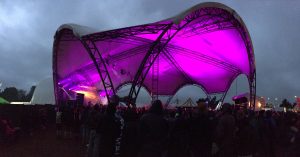 Caspian have this show all planned out. From ominous voiceover intro to the dynamic shadows of ‘Darkfield’, the Boston mob know exactly what to do to impress the large crowd watching them at a festival they’ve wanted to play for ages. Then it all goes wrong. Just as the song explodes so does a fuse. The sound cuts out, the lights go off, the power is gone and there’s nothing the band can do but stare at the sound desk in search of help. It could have killed the mood, the false start would totally deflate other acts, but Caspian gather themselves and, after some fast engineering backstage, go on to play one of the best sets of the weekend. ‘Malacoda’ is massive, so much better than on record, ‘Arcs of Command’ might be the best song these boys have ever written, and a finale that finds every member of the band banging out a tribal rhythm on different drums is a truly memorable moment.

And So I Watch You From Afar don’t even have to try. It feels like every single person at the festival is waiting to watch them, in the palm of the band’s hand before they even strike a note, primed to have a good time. But the Belfast group don’t go easy, I doubt they ever have. Instead ‘Search:Party:Animal’ is a fiery, neon beast of a song, the bass too loud in the mix but the energy and the lights and the sound undeniable, a physical force. ‘Wasps’, disappointingly the only song from ‘Heirs’ that gets aired, is a fizzy, fuzzy treat, and a new song promises even better to come. What a band. They could and should have headlined.

The best weekend of the year.

tagged with Agent Fresco, And So I Watch You From Afar, ArcTanGent, Caspian, Godspeed You! Black Emperor, Mono