THRICE- To Be Everywhere Is to Be Nowhere 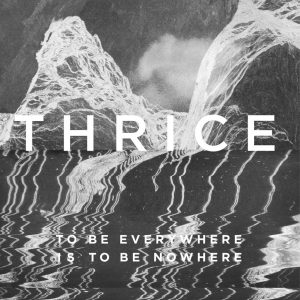 Thrice are back. And it’s difficult not to get overexcited about their return. The Californian quartet boast a back catalogue overflowing with original quality and only seemed to go from strength to strength before they called it a day five years ago, leaving a unique, almost genreless hole that no band got close to filling. They’re different from other groups in many ways of course; it was never going to be money or fame which would draw them out of their hiatus, only a powerful, motivating creative force. So, the arrival of ‘To Be Everywhere Is to Be Nowhere’ surely means Thrice have something special to say. Well, kind of…

Breezy opener ‘Hurricane’ is lush, a part Pixies tribute, part static-laced anthem, and all emphatic return to form. It’s the sort of song that few other bands could write and will likely open their live sets for some years to come. Classic Thrice. But its bold musicality, poignant power and lyrical poetry are not new constants. First single ‘Blood on the Sand’, which felt downright clunky on its own, does make better sense as part of the whole but still feels simplistic by this band’s lofty standards and is as lyrically blunt as that title suggests.

In fact, frontman Dustin Kensrue speaks more literally on this record than ever before, raging against invasions of privacy and invasions of foreign soil with equal ferocity but zero finesse. Ok, so it’s unfair to expect a comeback album to automatically sound like a grand return, like art that somebody has secretly been working on since the day they split, but some of this feels disappointingly one-dimensional, rushed even.

The one-two punch of ‘Death From Above’ and ‘Whistleblower’ sound most like ‘old’ Thrice- featuring Kensrue’s red-blooded roar, off-kilter riffing and buried, memorable melodies- but never really stretch their legs. Don’t get me wrong, I’d take an average Thrice song over the best their contemporaries have to offer, but there’s an unshakeable sense of settling here. Some of it will take time. Thrice albums always benefit from repeated listens. But it sure feels like ‘Blood on the Sand’ or the slow-burning ‘Wake Up’ will never truly bloom.

It’s unspectacular at times then and never once threatens to become Thrice’s best album but ‘To Be Everywhere…’ is still packed with quality. If Radiohead were born in Orange County they would write songs like ‘The Window’, ‘Black Honey’ is brilliant, and ‘Salt and Shadow’, a striking closing number that neatly harks back to ‘Hurricane’, might be the sweetest song they’ve ever sung. Then there’s ‘Stay With Me’. A simply massive song. There’s a chance its huge, brazenly pop sound chorus will put some off but it’s unlike anything they’ve ever done and truly special. Like, if Thrice were hot young things it would be a hit single already. Hell, if One Direction released it right now, it would be the biggest song in the world overnight.

Thrice are back then. And while ‘To Be Everywhere Is to Be Nowhere’ is unlikely to bring the band the ultimate success they’ve always richly deserved, to finally set things right, it’s such a heartwarming thing to hear them playing again. Welcome back boys.

tagged with Thrice, To Be Everywhere Is to Be Nowhere