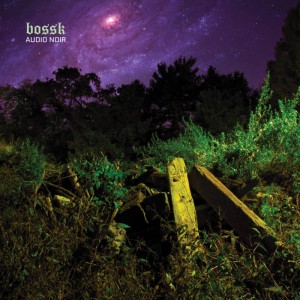 It all makes sense now. One listen to ‘Audio Noir’ and it becomes clear why Bossk have taken so long to release their debut album. The Kent unit’s first new music for three years, and their first substantial release since their last EP almost a decade ago, is monolithic. It doesn’t feel like it was recorded by regular microphones in a regular studio but like it was hewn into shape by the elements over a million years.

Opener ‘The Reverie’ goes from crystalline quiet to the heaviest heavy, ‘Heliopause’ is huge, a series of mammoth riffs recycling to make a wall of noise while vocalist Sam Marsh does his best Sean Ingram impression, and if the hulking power of ‘Atom Smasher’ feels almost orchestral then the final moments of ‘Kobe’ threaten to crush your speakers into cosmic dust. And while it has plenty of that granite heft, ‘Audio Noir’ takes off at times too. ‘Relancer’ is a looping, loping desert session and ‘Nadir’, not any throwaway interlude but perhaps the most touching cut here, is the soundtrack to the stars of the cover art. What is it that Torche say they play? Doom pop? This isn’t that, not exactly, but rarely does something so heavy sound so sweet.

It’s big then but ‘Audio Noir’ is not difficult to digest. There are shimmering guitars, streaks of light and beautiful moments balancing the force and the dark and the weight. And rather than the neanderthal lurch associated with some post-metal, this is kinetic and memorable. The music is also in more manageable chunks than on any Bossk release to date but it never feels like anyone at their new label was hanging over their shoulders, it feels like a natural evolution. Like maybe this is what Bossk was always supposed to sound like but the band was too young or too baked to get their great ideas in good order. Now it’s different. The songs are shorter than they used to be but the sound is bigger, broader, better. And it’s not just the run time that’s changed. Everything is refined.

‘Kobe, this record’s centerpiece, is the case in point. There’s a ton going on, spidery guitars, echoing layers, rolling percussion, but the thick production picks it all out. It has warmth and groove (all the best heavy songs have groove) but sacrifices no intensity for it. And then there’s that finish, an unholy firestorm of noise that’s somehow unique on an album of heavy high points, and exactly how the song deserves to go out. Bossk might’ve taken three times as long to make the same point less well before now. Hell, it barely even sounds like the same dudes who made those early EPs are behind this epic feat. Worth the wait and then some.