ABYSSE- I Am the Wolf 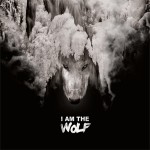 Oh, so close. That cover art really could have been special- the photography, style and design is great and goes a long way to setting up the moody, instrumental metal behind it. But then French four-piece Abysse had to go and use that font combination and it’s like finding a bug in your favourite meal. You can’t judge a book by its cover of course but this really is an album of maybes, almosts and not quites. For every moment like the engaging, serpentine power of ‘Persuasion’ or the slow burn intro to ‘Frozen Flesh’ there are some iffy grungy riffs and the nu-metal bass rumbles of ‘Architecture of Bones’. Some of the stylistic shifts are interesting, there is post-rock, prog and doom in the mix, but even when Abysse give themselves 10 minutes of space to work in, the songs rarely flourish. Much more could have been made of the nods to prime Metallica, chunky production and occasional air of real dread here, instead ‘I Am Ready…’ sounds like an unfinished Trivium song. From that cover art down then, Abysse do a lot of good stuff on ‘I Am the Wolf’, just rarely anything great.

tagged with Abysse, I Am the Wolf