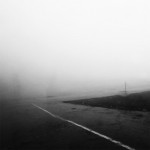 Well damn, there’s nothing minor about the opening track here. After a beat of almost-silence just long enough to have people foolishly slide up their volume bar, the third album from Melbourne six-piece Fourteen Nights at Sea explodes into life. Like being hit by a tidal wave, ‘Teeth Marks’ packs a ferocious first punch and then rolls on and on and doesn’t let go. There are no words but there is structure in the squall, the flood of noise crashing over a commanding but low-tempo stomp, a so-slow heartbeat. The mood is dark, there is doom and death in the water. The colours too, blues and greys and blacks- instrumental music never failing to put pictures in your head. Your head that’s pounding from lack of air because the song just does not let up. Even when the wave does break and leaves you breathless on the other side it still doesn’t really stop. And Fourteen Nights are excellent at disregarding the build-and-release conventions of their genre, seeming to sustain moments, even single notes, for far longer than should be possible. Building and building and building. And that’s the way they create tension and keep even the steadiest, simplest song here interesting and unpredictable. Little else matches that opener for volume, emotion or power but ‘Minor Light’ is a rare treat. Major.