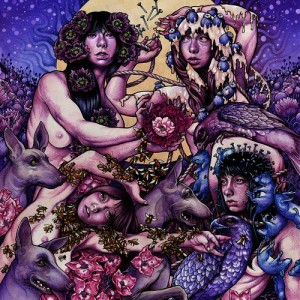 It’s difficult to talk about this record without talking about the circumstances behind it. Perhaps ‘Purple’, the fourth Baroness album, is borne from the Georgia band’s usual creative places. There’s a chance, of course. Or maybe, just maybe, this is a record indelibly marked by the bus crash that nearly killed them. The 2012 accident violently broke bones, some so bad that doctors weren’t sure if they would be able to save main man John Baizley’s arm, led to two other members leaving, and stopped the band, fresh off releasing the lush double album ‘Yellow & Green’, dead in its tracks. It was the kind of event that has finished bands before and sadly will again but Baroness didn’t quit. They battled back to health, back to a full roster, and back in to the studio to forge ‘Purple’. There’s little way around it, this is a record of damage and pain, persistence and recovery.

As such it’s quite different from ‘Yellow & Green’. Where that album felt autumnal and unhurried, perhaps even sluggish at times, this thing combines brains and brawn and really moves. Where that album used country licks and bluesy riffs to explore themes of growth and aging, here there are lyrics about crashing and burning, nursemaids and numbness laid over pulsing electronic flourishes and potent, churning riffs. ‘Purple’ is powered by, for lack of a better word, a new, fresh kind of drive for Baroness.

‘Shock Me’ starts like something from Harold Faltermeyer’s back catalogue before blooming into one of the most propulsive, vital songs this band have ever written. It could go on a soundtrack of its very own movie. ‘Try to Disappear’ builds big riffs on big riffs, ‘Desperation Burns’ is a mazy, muscular headbanger, and all the while the new recruits, bassist Nick Jost and drummer Sebastian Thomson, fit in seamlessly.

None of that means this album ever reverts back to the fuzzy bluster of the band’s earliest, heaviest years. Instead, Baroness have combined that sort of primal scream with the substance and subtlety they discovered last time out. Opener ‘Morningstar’ could be a battering ram in lesser hands but here the blunt force is peppered with spidery guitar sounds and keyboard swells and all the melodies. It’s like Iron Maiden got lost in a forest of folk metal for a few years. The warm rock’n’roll of ‘Chlorine & Wine’ feels like a mid-era Metallica track (that’s not a diss, ‘Load’ and ‘Reload’ kick ass, go listen again) and where the big riff of ‘Try to Disappear’ might have hit with all power, no precision previously, now it feels laser targeted. Like Mastodon before them, Baroness have learned that sometimes the heaviest riff sits next to the softest melody.

‘Purple’ is a triumph- the prettiest flower growing from the biggest pile of shit- and if August 2012 stole this band’s momentum away then November 2015 slips them right back into gear. So yes, bands have been through much less than Baroness and quit but thanks to John Baizley’s resolve, and his band’s determination, they’ve unleashed their best record yet and a future full of colour and fat with potential.