Everything sounds the same. At least that’s what people unfamiliar with the far ends of alternative rock might say should they pass Fernhill Farm this weekend and only briefly listen in. But for two amazing years already ArcTanGent has proven the exact opposite. Under a (weather appropriate this year) umbrella of noise, math and post-rock the festival has presented a dizzying array of quiets and louds, varying styles and wildly different but no less incredible sounds. The 2015 edition delivers again.

Rain, it turns out, comes in a few varieties too. As ATG opens for early birds on the Thursday there is mud on the ground and moisture in the air but nothing can dampen AK/DK’s spirits. Powered by double drum kits, buzzing synths, huge smiles and distorted voices, the Brighton duo are brilliant fun.

Mutiny on the Bounty are clearly having a great day too. Apparently sick of playing the long game (they’ve been going for over a decade now) the Luxembourgers have upped their game something wicked of late. Throwing plenty of shapes but keeping their sweetest ear candy firmly in place they rattle through the best set of the day. New songs gel perfectly with old, a cover of Adebisi Shank’s ‘Masa’ is fiery and fitting, and ‘North Korea’, a festival highlight, is a glittery, ballsy battering ram of a song. After that LITE make less impact. The play very well and the crowd are into it but they lack any knockout punches. 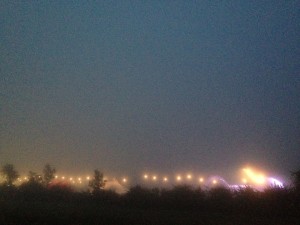 Even mother nature takes note of 65Daysofstatic. That’s the only explanation for an almighty thick fog rolling across the festival site just as the headliners take the stage. It’s notably weird and eerie and an excellent backdrop for the Sheffield outfit’s unique electronic swarms. A few glitches threaten to rob their set of momentum but listening to songs like ‘The Undertow’ and ‘Radio Protector’ while the weather suggests you’re on another planet is something else. It’s a real moment.

The mist has moved up to low dark clouds by Friday morning and Tacoma Narrows Bridge Disaster take the ominous atmosphere over the main stage and amplify it. Their shifting post-metal is most impressive when they debut new material. We Never Learned to Live air new songs too, showing a vital growth out from under their influences, and bring some of the best bass tone to the festival all weekend. Quadrupède couldn’t care less about the weather or the day of the week or even the people watching them. Their kitchen-sink drum-powered noise-rock is unstoppable and the French duo fully vindicate those that tipped them as one of the bands to watch here. 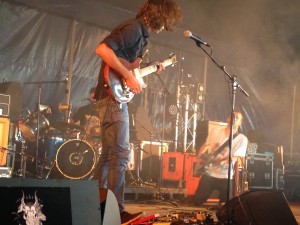 Valerian Swing go all-out. Some of the sharper edges of the Italian trio’s recorded output are lost as they throw themselves around the festival’s third stage but frontman Stefano’s story about a Dillinger Escape Plan show changing his music and his life is wonderfully passionate and ‘Scilla’ is perhaps as close to ArcTanGent gets to a hands-up, sore-throat singalong. Listen to this band.

One thing of note off, rather than on a stage this weekend is how few cameras and phones (same thing now right?) are recording things compared to a ‘regular’ festival or show. ArcTanGent it seems is all about enjoying the moment, in the moment. Still, it takes something special to completely hush that low level hum of any assembled crowd. Her Name Is Calla do exactly that. Tom Morris’ soulful, emotional voice, the band’s stirring strings, and their layered, creative songs slice through the chatter. ‘New England’ is a rumbling soundtrack for the party at the end of the world, and ‘Condor and River’ remains a heartbreaking but magnetic masterpiece.

Maybeshewill have strings too, which is new. The Leicester five-piece are pretty much the ATG house band at this point, the only act to go three for three here (they’ve actually performed four times), and have pulled out something special for their latest slot. Damn near orchestral without the mini string and brass sections they’ve brought along, today they sound stronger and sweeter than ever. The extra gale force behind an accidental encore of ‘Not For Want of Trying’ might even be enough to convince them to make it a permanent fixture.

Chon’s happy, hazy instrumental rock is neat, and it’s sweet that they seem honoured by the large crowd in front of them, but they play small, like their best is yet to come. The Fall Of Troy have no such problems. The Seattle trio, alive again after a four year break, play like recharged men, like they’ve got bones to pick with the main stage. Their sweetest melodies and hyper-speed weirdness are all present and correct but the band are at their best living right on the edge- collapsing ‘Semi-Fiction’ into squirrelly feedback or letting ‘F.C.P.R.E.M.I.X.’ do whatever the damn hell it pleases. 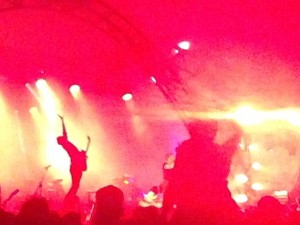 There is no stopping The Dillinger Escape Plan. The now-legendary New Jersey outfit were perhaps the most crowd-requested act since this festival’s inception and live and in the flesh they don’t disappoint. ‘Prancer’ has come for your smallest parts, your retinas and eardrums, but pounds at your gut too, ‘Milk Lizard’ makes an early appearance prompting frontman Greg Puciato to quite correctly say, “Now it’s a party!”, and ‘Sunshine The Werewolf’ is wild, unflinching terror set inside a song that doesn’t care one bit that bands here normally don’t scream or spit or swear. They don’t normally surf to the central support of the main stage, sidestep security, climb it and jump feet first back into the crowd either but that doesn’t stop Puciato. An unforgettable firestorm of a headlining set.

Saturday starts strong with, uh, Steve Strong and blazing sunshine. A one man band, he neatly combines layers and loops to build songs in front of your ears. USA Nails feel very rough around the edges after that but Eschar are incredible. Benefitting from genuinely sounding like nothing else on show this weekend, once the Guildford quartet get over some nerves they lock into powerful post-metal grooves packed with promise and potential.

Never judge a book by its cover. And never guess what a band will look like from their sound. The icy cool that Gum Takes Tooth conjure up on record definitely does not equate to the grungy oddballs performing it on stage. The bass turned way up means some of the duo’s subtler sounds are lost in the static but watching Jussi Brightmore bounce around like a drunken dad at a wedding while rumbling the Mendips with his array of marvellous machines more than makes up for it.

Young Legionnaire feel like the best kept secret of the festival. Which is weird to say not only because they feature former members of Yourcodenameis:milo and Bloc Party but because their big-riff art-rock is bloody brilliant. It’s smart and catchy and vitally alive. They promise a new album (finally!) and plenty more incredible performances to come.

Talons are terrific too. One of just a handful of bands this weekend to truly make the main stage feel their own, the Hereford six-piece shift their surging, swelling, distinctively-composed instrumental rock from a whisper to a roar and back again with grace and ease. ‘Monuments’ is a creeping-crawling monster that sends atmospheric tendrils through the crowd before clamping its orchestral jaws down, ‘Reverie’ is the most beautiful light relief, and ‘The Dreams Have No Dream’ is immersive and all-powerful. Perhaps it’s lazy to say but Talons are the closest thing the UK has to Godspeed. They could headline this thing next year. Just as they finish, almost as if they rumbled something loose in the sky, a genuine fuck-you of a thunderstorm hits the festival site head on. Nobody is placing blame but Talons, you know what you did.

So the rain is back, the mud is back, the gloom descends. But then a funny thing happens. While there are still grey clouds circling ArcTanGent in all directions, the icy post-rock of Pg. Lost emerges to rays of sunshine. Occasionally they drift too close to 80s movie synth sounds but at their best the Swedes provide the perfect soundtrack for some eye-of-the-storm skygazing.

The Algorithm might be ArcTanGent’s least good fit but Rémi Gallego doesn’t care. He bangs his head and crowbars his pulsing progressive metal into hearts, minds and dancing feet. The sonic ingredients aren’t too different really but Vessels make perfect sense here. A chill is in the air when the Leeds outfit first appear but their intelligent electric instrumentals spark a fire in the crowd. They have mastered space and patience and the art of the slow (sexy even) build, and possess that special unknowable thing that only really really good bands have. From first note to last they’re capable of making you forget you’re on a Bristol hillside. Bonus points too for making a few hundred beardy nerds dance like they’ve stepped inside the first club they’ve ever enjoyed.

Deafheaven top the bill but can’t top that. Where George Clarke’s voice is another instrument on record, a blast of brilliant static, tonight it’s too loud in the mix and a screech that itches and scratches. Drummer Daniel Tracy’s relentless strength, walls of sound you can damn near see, and a titanic run through ‘Dream House’ almost make up for it but it’s not quite the triumphant finale this festival deserves.

Nothing sounds the same then, not at all, and it remains amazing that all of this weekend’s sights and sounds and styles slip into a single box marked ArcTanGent. Long may she rain… sorry, reign. See you next year!

tagged with 65daysofstatic, ArcTanGent, Chon, festival, Her Name Is Calla, The Dillinger Escape Plan, the fall of troy