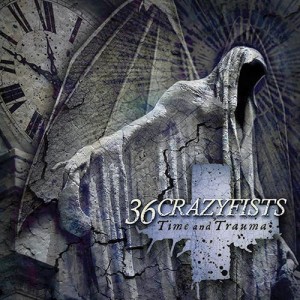 The general vibe seems to be that this is no good. Words like lazy, grey and dull have been kicked around. And maybe you couldn’t blame 36 Crazyfists for going through the motions here, after 20 years together, after everything that’s happened to them lately. But it simply isn’t true. The Alaskan metallers have turned tragedy into triumph and album number six is one of the best that they’ve written.

Five years ago they were a band of brothers, original drummer Thomas Noonan hadn’t called it quits, and they weren’t touring with a fill-in bassist, burning out. And back home, frontman Brock Lindow still had his grandmother and mother that loved him. It really doesn’t take long for everything to come undone.

So perhaps what some hear as grey here is actually black, a dark pitch black. Because, so obviously affected by what’s come to pass, there’s an emotional and musical weight to ‘Time and Trauma’. It’s truly new heaviness for a band so used to keeping it light, and it creeps over you from the first minute. ‘Vanish’ is a stomping monster of an introduction carrying candid lyrics like “I feel the anchors pulling me down, no escape… A hole in my heart stealing life from me”, ’11.14.11’ is packed with spiky menace, and the gritty tone of album highlight ‘Silencer’ is reminiscent of Korn’s ‘Life Is Peachy’, another snapshot of a band at their most raw and personal.

The gloom never becomes a grind though. The shiny hook buried in ‘Sorrow Sings’ could have been drawn further out for better effect but ‘Swing The Noose’ is half acoustic singalong, half ultra catchy anthem, and lead single ‘Also Am I’ is classic Crazyfists; rapid-fire verses giving way to an instantly memorable chorus with Lindow’s range impressive as always. There’s a reason it has fit seamlessly into their live shows.

Thanks to some unique vocals and a refusal to sit neatly in a single genre, 36 Crazyfists have always been an acquired taste but the way this record has apparently been written off is short-sighted. It’s occasionally a tough listen, painted by loss and love, but it’s more than worth the effort, a sombre but scintillating chapter in the band’s story.