Sour news. Goodtime Boys have announced their split. So soon after their debut album made our best of the year list too! They sound like they’re taking it better than us mind.

“After being a band for just over six years we’ve decided to stop making music as GTB.
The band has become harder to manage over the past year or so and various things have contributed to us deciding to end it. We’ve toured with some incredible musicians and have made so many friends through music, it really has been more than we could have hoped for. Thank you to every single person that’s been involved with the band on all levels along the way. Promoters, labels and our friends have all been so generous and willing to take a chance on us. It’s been great. Everything ends.”

They do tease new music coming this year under a different name but the good ship GTB was a beauty and we’re sad to see it go. 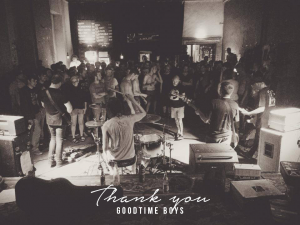