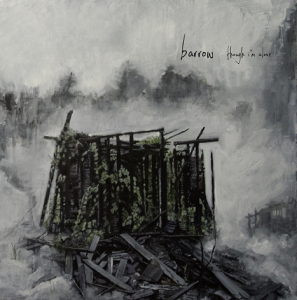 Darkness falls. Ok, so North Carolina quartet Barrow weren’t exactly a light-hearted bunch before but it sounds like the weight of the world has descended on them for album number two. Like Funeral Diner or Envy before them, Barrow tap into a grey vein of noisy, ugly honesty and raw emotion here and shy away from nothing. ‘Though I’m Alone’ is a bleak, battered mix of metallic rage, shoegazing indie, and itchy, scratchy post-hardcore pain. It’s a frayed nerve of a record from a band clearly too close to whatever edge conjures up your darkest demons.

‘Fox Ears and Silence’ feigns at post-rock shimmer but the ambience here is creepy and ominous rather than bright and breezy, and the quiet is quickly cut apart by bulldozing bass notes and Zach Tobin and Travis Schuster’s harrowed screams. ‘A Dead Hum, Echoed’ could be latter-day Brand New if Jesse Lacey lost all hope, and ‘Fed (Choking, Retching)’ is a blackened rager stopping for nothing. Occasionally the layered guitars will lose clarity, some moments slipping into a fog of fury, but the band regularly, deftly pump the brakes. ‘Old Timer’ is a wail in the wind, a fantastic far-away kind of song, and ‘Clawhold’ is barely-there, hushed, sombre and confessional.

In fact, some of this is so raw that’s its occasionally hard to listen to. Making it through ‘Wither’ in one go feels like stealing glimpses at someone’s diary, musical textures shifting from lightning storm loud to whisper quiet while Schuster spills his guts, and in the middle of ‘A Dead Hum, Echoed’ it sounds like somebody has just received the very worst kind of news. The sadness could swallow you up.

Difficult stuff then, but this is definitely a journey worth taking. ‘Though I’m Alone’ is a stark record but a striking one, smart and individual too. Here’s hoping Barrow record again before the darkness does them in.

tagged with Barrow, Though I'm Alone