SHAI HULUD- Reach Beyond the Sun 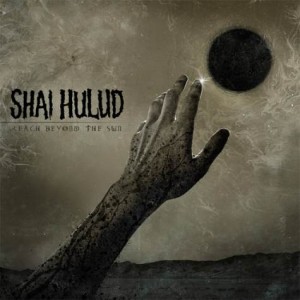 This shouldn’t have any impact. Shai Hulud’s influence now extends so far that bands are ripping off bands that already ripped off the New York outfit and they don’t even know it. Seriously, had Shai Hulud not recorded their scene-starting debut ‘Hearts Once Nourished with Hope and Compassion’, names like Counterparts, The Ghost Inside (whose frontman guests here), and Hundredth (whose frontman filled in on vocals for the legends last summer) simply wouldn’t play the way they do. Instead of sounding old and used up though, ‘Reach Beyond the Sun’ is scintillating from start to finish.

That the band still sounds fresh is down to guitarist Matt Fox alone. An ever present in the band’s perma-shifting line-up, he maintains an acerbic attitude (sample lyric: “To suffer fools, is to exist”) while consistently producing electric and energetic new riffs and rhythms to tie the rage to. ‘I, Saturnine’ shreds like Metallica covering three hardcore classics at once and while not even two minutes long is better than most of the material from the last Shai Hulud album, ‘Medicine To The Dead’ expertly combines metal and melody while the mood remains dark, and ‘If A Mountain Be My Obstacle’ is massive, a wall of noise, pain, and scream-along sincerity. This thing spits like water in boiling oil. The chaos might even be difficult to fully grasp on first listen- although there’s no denying that the title track and ‘The Mean Spirits, Breathing’ are belligerent, magnetic instant hits- but every repeated spin reveals something new, something special.

That Fox has brought former frontman and erstwhile New Found Glory guitarist Chad Gilbert back into the fold helps. Gilbert’s passionate bark remains underappreciated in hardcore and while his production job on ‘Reach…’ is his best yet, he adds vital energy in the vocal department too. On closing track ‘At Least A Plausible Case For Pessimism’, while the band pile on the melody more than ever before, he sounds like he’s literally singing his guts out. It’s a damn shame he won’t be a touring member.

Long time fans of Shai Hulud will always hold ‘Hearts…’ close to their, y’know, but there should be few qualms suggesting this is the band’s best effort in a very long time. It could bring their particular brand of terror to a ton of new ears too. If the presence of Gilbert and the other guest stars don’t do it then the force and fury here- still superior to the output of most young pretenders- certainly will. Impact indeed.