THE ACACIA STRAIN- Death Is The Only Mortal 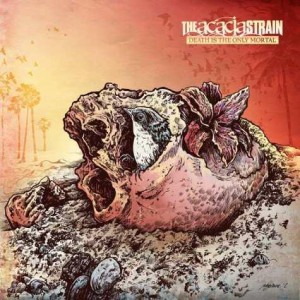 It still ain’t broke. It still doesn’t need fixing. The Acacia Strain’s unstoppable groove machine might sound stuck on repeat for some, but if the band have ever scratched your itch for apocalyptic metal, ‘Death Is The Only Mortal’ should continue to satisfy. This is another soundtrack to the end of days.

Any fear that the Massachusetts outfit might have mellowed with their move to Rise Records is swiftly squashed when the blackened riffs of ‘Doomblade’ threaten to tear your speakers in two. It’s part-Meshuggah, part-rabid dog roar, all awesome, and it sets a pretty reliable mark of what’s to come. Elsewhere, Kirk from Crowbar might bellow like a bear on ‘Go To Sleep’ but frontman Vincent Bennett sets a new record for pure misanthropy on ‘Victims Of The Cave’, and while some cuts may not be as immediately catchy, this record ably improves on 2010’s ‘Wormwood’. Where that was an almost single-speed weapon of destruction, The Acacia Strain push and shove their titanic riffs in different directions here. ‘Our Lady of Perpetual Sorrow’ neatly picks up the pace, corrosive but mercilessly clinical, ‘Dust And The Helix’ is a whirling, snarling rager, and ‘Brain Death’ combines a neat solo with, whisper it, melodic tones, to become a real highlight.

Fret not though, the invention doesn’t affect the aggression. And despite the landslide of copycat bands come after them, The Acacia Strain remain uniquely nihilistic, hateful and heavy. ‘Death Is The Only Mortal’ is one of modern metal’s most impressive slabs of violence. Superb.

tagged with Death Is the Only Mortal, Rise, the acacia strain