THE CHARIOT- One Wing 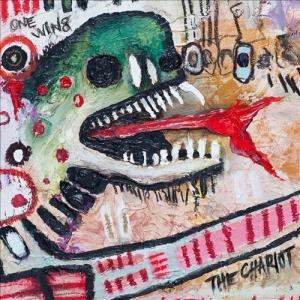 This is the musical equivalent of pouring water on boiling oil. An itchy, fizzy, violent fireball of a record, ‘One Wing’ is bold, belligerent and, you better believe it, beautiful too. And it might just be the best Chariot album yet.

It’s barely been two years since this band last recorded new music but as ‘Forget’ squirms into life here, you can only be glad to have them back. Josh Scogin’s voice is both raw and powerful and, in a scene stuffed with soundalikes, it’s unique too. He always assembles a band of talented brothers around him and together they make brilliant music.

Alongside Scogin’s pained howl and the band’s now trademark bluster, they’ve included grungy riffs, shredding metal, soft female vocals, electronic effects, strings and piano in the noise here and arranged them in an electric, almost cut-and-paste fashion. Now, that might sound like a kitchen-sink approach but there is finesse here, it’s true experimentation, art really, rather than seeing what sticks. Describe the spaghetti western centre (whip crack and all) of ‘First’ and you’ll likely draw confusion, perhaps even laughs, but as it spills out your speakers it makes perfect sense, it’s unforgettable.

The best bit though, is that they manage to pull complete-feeling and memorable-sounding songs from the maelstrom. ‘Not’ (the tracklisting spells out “Forget Not Your First Love. Speak in Tongues and Cheek”) goes from machine metal noise to a grand, almost operatic climax, ‘in’ is a two-minute rager but more than spiky enough to stick around, and although ‘Cheek’ contains almost the entirety of Chaplin’s over-sampled speech from The Great Dictator, it still leaves a superb and permanent mark.

The frenetic pace, intelligence and variety won’t suit everyone but if ‘One Wing’ clicks, and by god it’s clicked with me, it’s record of the year material.

tagged with One Wing, Season of Mist, The Chariot