Listener’s ‘talk music’ has been described as aural marmite. You either love it or you hate it. Well, adoration overflows in Basingstoke tonight. This gig is sold out, and the crowd eat it up. As enigmatic punk poet Dan Smith takes to the stage, accompanied by his massively bearded, multi-instrumentalist main hombre Christin Nelson and now a drummer, a hush falls over the inside of the appropriately-named Sanctuary. It’s like church. But better. And what fills the quiet is incredible. 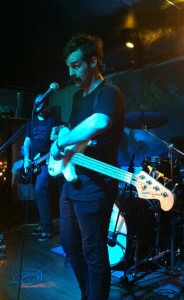 Opening with a new song the trio immediately lock in together, finding a rare groove. The flurry of new tracks that follow suggest forthcoming album ‘Time Is a Machine’ will be the loudest, largest Listener material yet.  The post-rock riffs and pounding drums might mean Smith’s lyrics are a little lost at times but there’s a new power to the music. It adds to the older cuts too, turning ‘I Don’t Want to Live Forever’ into a tumble-along rager. 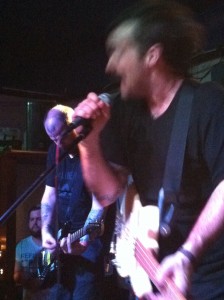 Really though, the star of the show is Smith. A fascinating host, witty and welcoming, but apparently plugged in on some other, higher level, he sweats honesty and smiles like he knows something no one else does. He’s almost impossible to turn away from even when tuning his bass or fiddling with his fantastic moustache but in full flow, as when he wrestles with the wonderful words of ‘Wooden Heart’ alone, he’s utterly magnetic.

It’s supposed to be an exceptional gig that feels this electric, this energizing, this special, without huge lights, earth-shaking sound or superstar status but it’s clearly standard stuff for Listener. Far from marmite, this is fine dining. No, more than that, this is like eating for the first time. Faultless.