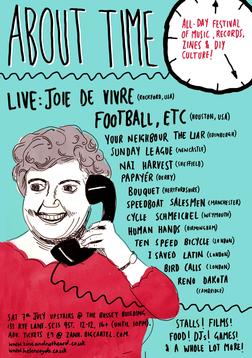 This is what all gigs should be like. Except… maybe not. Maybe if you had to trek to Peckham, find a tiny alleyway into an old cricket bat factory, get past two security checkpoints, and go up three flights of stairs (not four, that’s the community theatre) every time you went to a show, it would start feel like a bore not a brilliant adventure. Maybe if people saw how easy the guys behind today made it look, everyone might try it, try and fail. And maybe if all line ups were this special, we’d be blasé or broke, even more than now.

Now it may be true that the presence of Football, Etc. and Joie de Vivre- two stellar US outfits going from strength to strength- inspired some early buzz about today, but it’s not just the American headliners that have made this an unmissable ticket. Unfurling before them is a jaw-dropping who’s who of the UK emo scene. Hell, as someone says from the stage, sorry… ‘raised platform’, later in the day, if you dropped a bomb on this place it would only be Well Wisher left.

Reno Dakota represent brilliantly. Giving it all unassuming eyes and skinny limbs they trojan horse static-laced mathy jams straight into the minds of plenty of early arrivers. Their mid-pace material plays better than the faster stuff but a song so new it hasn’t even got a name promises a better combination of speed and melody is to come. Bonus points too for erstwhile Maths drummer Alfie Adams being a whirling dervish. 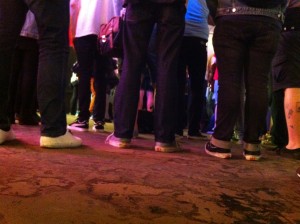 Both Cycle Schmeichel and Speedboat Salesman employ two dudes to make a whole mess of noise but while the former are super fun and play a tumble-apart full-power set that includes a song called ‘Rad Bromance’, the latter are playing their second to last show with a fill-in drummer while singer/guitarist Christian sounds like his world is collapsing around his feet. The mega brilliance of ‘Man the Fuck Up’ only makes the sting sharper.

I Saved Latin might have twice as many people on stage but are a sleeker proposition. Like Weezer they feed sunny pop through a dark and emotional filter and come out with something awkward but wonderful. Unlike Weezer they appear to have no problem with you looking directly in their eyes. It feels weird to even think such a thing on a day like this, in a place like this, but the London lads could be massive.

It’s Plaids and the rolling menace of Human Hands that are the UK acts with the most fully formed original identities though. Hey, maybe it’s just emo burnout but after hearing a few bands plough the same furrow, the gruff party-starting punk of last minute addition to the bill Plaids is perfect. Perhaps unbelievably they’re the first band to stray into the crowd but it’s all done with the best intentions, to make their fun more infectious, it’s like they’re the happiest of everyone to be here.

Only then Football, Etc. arrive to challenge them. Mercy and Lindsay kick out jams that are often so laid back they could be accused of sounding mean and moody but they do it with huge grins on their faces. You can feel their enthusiasm pouring off the stage. ‘Sudden Death’ builds and builds and builds, Lindsay’s tiny frame somehow producing a powerful voice that betters the recorded version, ‘Flood’ is some beautiful bastard version of The Smiths that starts the girls dancing and bouncing together, and when the crowd start yelling the opening riff to ‘Safety’ while the band are still getting ready to play it, their smiles go supernova. It finishes the most complete sounding set of the day. The very definition of a good time. 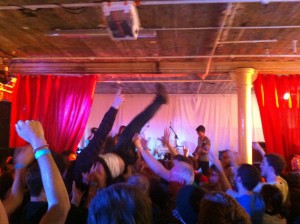 Finally Joie de Vivre arrive and ably, easily, oh so brilliantly prove their worth. They rattle through their set like the show could get cancelled any minute, inspire crowd surfing that almost does get it shut down, and take the prize for sweatiest band of the day. ‘Salt’ is even more beautiful than on disc, the trumpet, provided by possibly the world’s smallest trumpet player, feeling like a vital part of proceedings rather than tacky or tacked on, ‘Upper Deck…’ goes from one of the band’s quietest numbers to a speaker-shredding joy, and Lindsay from Football, Etc. adding her voice to a spate of new songs is icing on the cake. The crowd responds with arms aloft, cracked voices and lots of love.

In an alternate universe the band stayed split when they called it a day late last year and this isn’t happening, and in yet another version the adoration here is magnified and the band megastars. Somehow, right about here seems just about right. Maybe all gigs should be like this after all. It’s about time.