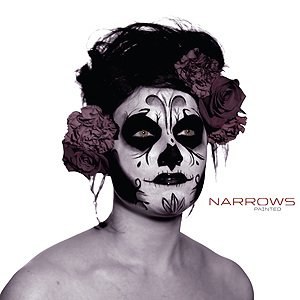 Praise be. If the first Narrows album was a warning shot, proof positive that combining former Botch, Unbroken, Some Girls and These Arms Are Snakes members didn’t make for a part-time supergroup but a vitally exciting prospect, then ‘Painted’ is a perfectly planned total assault. Like, some tactical nuke shit.

Everything is better here than it was before. Tempestuous lead guitars and crunchy, jarring rhythms spiral together and then scatter apart, bass lines thunder and prowl (seriously, the start of ‘”It’s The Water”’ sounds like it wants to steal your wallet), drummer Sam Stothers has stepped up in the smartest way, and Dave Verellen’s firebreathing roar (man is it good to hear him let loose again) comes as close as anyone can to conducting the whole twisted affair, like a wounded bear driving a runaway train. Quite how they manage to sound this in sync, this special, living as far afield as Seattle, San Diego and our own fair London is incredible but you can taste the chemistry.

So ‘Painted’ sounds like hardcore record, sure, but this thing has got sinewy connections to Nirvana, Sonic Youth and Slint, and owes more to Steve Albini than any straight edge pit crew noise too. There’s punk but the chaos is controlled not contrived, metal but no clipped, mechanical bluster, only grimy, grizzly, acidic rage, and even some dark, spacey indie but it’s never respite, it’s every creepy, dangerous vibe you’ve ever felt given a musical voice. Like Coalesce, Cave In or Isis, this is heavy music that’s impossible to pigeon hole.

Narrows aren’t reinventing the wheel or anything though, these are the same separate ingredients available to everybody else, they just make spinning them into fresh, ferocious, exciting, and truly angry shapes sound easy. A contender for album of the year.