EMMURE- Speaker of the Dead 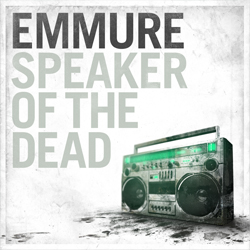 Haters gonna hate. But album number four from New York outfit Emmure is excellent. Where previous effort ‘Felony’ felt ragged and unfinished, this thing is crisp, clear and kills it from big bang opener ‘Children Of Cybertron’ to the impossibly heavy final assault of ‘Word Of Intulo’. Fans of breakdowns rejoice, the pile-up of riffs in ‘Dogs Get Put Down’ could disperse protesters much quicker than riot shields and water cannons, Demons With Ryu’ ratchets up the tension and guitar squeals, and while ‘Solar Flare Homicide’ takes a couple of listens to stand out, once the rallying cry of “I see a fire in the sky” is lodged into your brain, there’s no removing it. Uh huh, it’s pretty much relentless, the band aren’t about to switch up their trademark bottom-end chug just yet, but there is light and shade here.

‘Bohemian Grove’ is a slow, sludgy tsunami of rage while ‘A Voice From Below’ is a leaner, cleaner cut of metal, and instead of using layered guitars to pummel and maim, ‘Last Words To Rose’ actually turns into something quite beautiful. Look, if metalcore isn’t for you, then neither are Emmure. And sure, some will still see this band as the Saw movie franchise of metalcore- lowest common denominator art made quickly for mass-consumption- but there’s little denying that ‘Speaker of the Dead’ is packed with the real anger, raw-throated intensity and record-setting heaviness. Emmure’s best album yet.

tagged with Emmure, Speaker of the Dead, Victory