Now this is a rock show. Not a stadium gig or an arena event or anything like the sort of enormo-performance the Foo Fighters are now used to playing in the UK (and will play again come July), this is a rock show. Oh sure, there are giant speakers, flashing lights and 10,000 people here but the band on stage appear not to have noticed. Instead of elder statesmen going through the motions they play like punk rockers proving a point. They play fast and loud. And play one of the finest Foo Fighters shows ever. 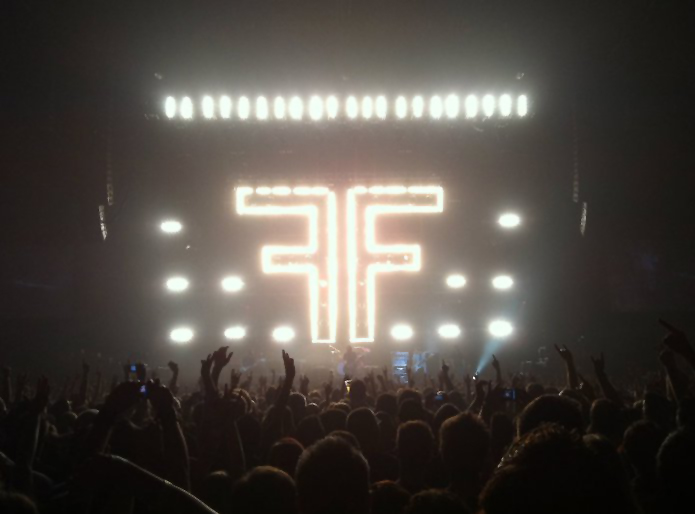 But that can’t be right, right? Because there’s no spectacle here, no months of build-up, no famous stadium- we might as well be in a cow shed. Correct. But that’s exactly why this does work. Instead of arriving with a big bang, desperate to impress, intent on justifying headline status, the band turn up, plug in and power through ‘All My Life’ like the building might collapse if they don’t get it done quick. There’s no pomp, no ceremony, no extended songs, no excursions into the crowd. Instead there’s a crackling ‘Times Like These’, a fun and furious ‘Generator’, and a version of ‘My Hero’- fully electric, fully alive- that sounds like a different band is behind the wheel. This is a set with serious balls.

There are new songs in the mix too but they don’t suck the momentum away, they dial it up. Opener ‘Bridge Burning’ goes off like a rocket, ‘White Limo’ doesn’t just have Lemmy in the video but in the spirit of its fuzzy riffs too, ‘Rope’ is a tight, twisting dynamic treat and maybe just the best debut single from a Foos album yet, and ‘These Days’, going from careful quiet to big, bombastic loud, is simply brilliant. Then there’s ‘Stacked Actors’ (“I like playing this song, because you like hearing it”), ‘Everlong’, ‘This Is a Call’ and ‘Best of You’ but not a single wasted second, only rock’n’roll played right.

All the while Dave Grohl doesn’t look like he’s performing, he looks like he’s having fun with his friends. Maybe working on new album ‘Wasting Light’ in his home studio (“We made this new shit in my garage!”) has loosened him up, maybe the fact that this is actually NME’s Big Gig and not officially the Foo Fighters’ Big Return has relaxed him, or maybe the handful of low-key shows the band have already played this month have reminded him how good it can be to really rock out. Whatever, it doesn’t actually matter why Foos feel so free tonight, just that they do, and that they’re surging through a greatest hits set like the power might be pulled any moment.

Hell, if they can translate this energy, heart and soul to their Milton Keynes summer set then they could quite easily rank as the greatest gigs of all time. As it is, this one’s right up there. Superb.