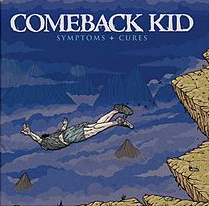 Seeing Comeback Kid live and in flesh is key. Oh, they’ve been good on record before, great maybe, but they’ve never been able to capture the unrestrained energy of their show on disc. At least, that is, until now. Album number four see, finds the Canadian five-piece on their finest form yet. And from the firebreathing first track to the slow burn of the final seconds, it feels like they’ve burst in the room to play it to you.

Capturing that pure passion and vital vigour is not the only thing they’ve finally got together either. ‘Symptoms + Cures’ is the net result of a band learning their lessons- It’s the sound of a smarter band than the one behind Comeback Kid’s snarling debut, a tighter band than the one that made ‘Wake the Dead’ and a fitter and happier unit than the one which hurried through ‘Broadcasting’ three years ago- and every track here benefits. So that opener, ‘Do Yourself A Favor’, bursts into life like it wants to burst your eardrums, sounding pretty confident in the fact that it’s one of the best songs these dudes have ever written, ‘Because Of All The Things You Say’ is a perfect example of fist-pumping, heart-wrenching hardcore, ‘The Concept Stays’ combines pure hardcore trauma with the epic aggression of frontman Andrew Neufeld’s side-project Sights & Sounds and is all the better for it, and when Neufeld screams “eye for an eye” on the title track, the conviction is clear and you truly fear for whoever he has in mind.

This thing isn’t about mere moments though. ‘Symptoms + Cures’ makes perfect sense as a complete album. For all the wicked riffs and gravelly screams, it’s calm, collected, and considered. And yet clocking in just a few seconds of shy of 40 minutes it’s a real rush of blood too. All killer, absolutely no filler. In fact there is only one downside here- just how the hell Comeback Kid are going to follow this.