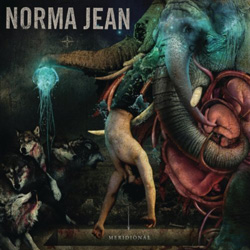 Norma Jean are always at their best unleashing impulsive primal screams, not concept-heavy brain-busting bluster. That doesn’t have to mean relentless rabid dog rage (although there is some of that here), just that the band’s noisy metal really works when you can feel them thinking on their feet, not thinking every riff or lyric to death. ‘Meridionial’, despite the title needing a wordy explanation, proves it. From the sneaking, snaking feedback and fiery rage of opener ‘Leaderless And Self Enlisted’ to the grimy melodies of ‘The People That Surround You On A Regular Basis’ this thing feels white hot and vitally alive. ‘The Anthem Of The Angry Brides’ is just over two-minutes long but the best thing here by miles, frontman Cory Brandan sounding genuinely pissed-off, while the charging riff and chants of ‘Deathbed Atheist’ and the bruising ‘Blood Burner’ kill as well. The more careful and considered material doesn’t. ‘A Media Friendly Turn For The Worse’ twists too slowly (and sounds too much like Thrice’s ‘Under A Killing Moon’) to sink its teeth in, ‘Falling From The Sky’ is definitely high-concept and definitely does nothing for the cause, and a couple of ambient interludes only suck the pace and power out of proceedings. There is far more wheat than chaff though and the spectacular, spur of the moment stuff succeeds in making this one of Norma Jean’s best records yet.