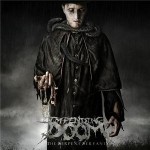 These dudes weren’t messing about when they named their band. One listen to The Serpent Servant and you’ll be convinced that the end of days has come. But don’t panic; now we’ve got the perfect soundtrack.

This is no devilish new noise- it’s the sort of booming, impossibly-heavy, super-intense metal that bands like The Acacia Strain and Emmure do so well- it’s just that the five California Doomsters do it so well that very soon people will be comparing other bands to them instead. And if you aren’t immediately impressed then the record will probably find a way to shake your bones until you’re convinced. Seriously, some of this stuff actually wants to hurt you- the opening one-two here is the musical equivalent of suckerpunch to the guts that’ll have you gasping for breath for ages.

There’s no macho posing or ridiculous Cannibal Corpse-eqsue horror here though, it’s genuinely scary stuff. The wailing guitar of Anything Goes gets under your skin and stays there, City Of Refuge sounds like your closest tower block collapsing, and if after listening to the final strains of the title track you still aren’t scared of meeting frontman Brook Reeves on a dark night then you’re braver than anyone around here. All of which is really weird when you find out that that band are good Christian boys.

Sure, Impending Doom aren’t the only band playing this sort of metal at the minute but there’s that incalculable x-factor here that forces The Serpent Servant to the front of the pack. Hell, by the time Beginnings finishes things off (see what you did there lads) you’ll be praying for the world to explode just so you can hit play again and see exactly how good the wall of fire looks with this record spinning in the background. Brilliant stuff.